Starting the first week of July, we will be offering morning classes for Brazilian jiu-jitsu with Fabiow Medeiros. Classes will take place on Mondays, Wednesdays and Fridays at 10:00am. As the classes grow in size, we will add more to the schedule. Professor Fabiow Medeiros started training at a young age in his hometown of São Paulo, Brazil. At the age of 15 having earned a blue belt he moved to the United States to continue his training under the Renzo Gracie flag.
To further compliment his jiu-jitsu, Fabiow participated on his high school wrestling team. Also, he has competed at both local events and major tournaments such as IBJJF Worlds, Pan and Local opens. When he is not training he also participates as a referee for the IBJJF traveling the world working all the major events. He has been teaching for the past 11 years , 5 years as a colored belt and 6 years as a blackbelt. Also, for the past 3 years, Fabiow has been teaching at the world famous Morumbi Academy in São Paulo Brazil. At the academy he is in charge of the technical development of over 250 students varying from children, white belts an even experienced black belts. As of today, Professor Fabiow is a 1st degree blackbelt under Renzo Gracie and also holds a brown belt in Judo under Clyde Worthen. 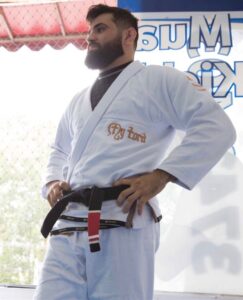